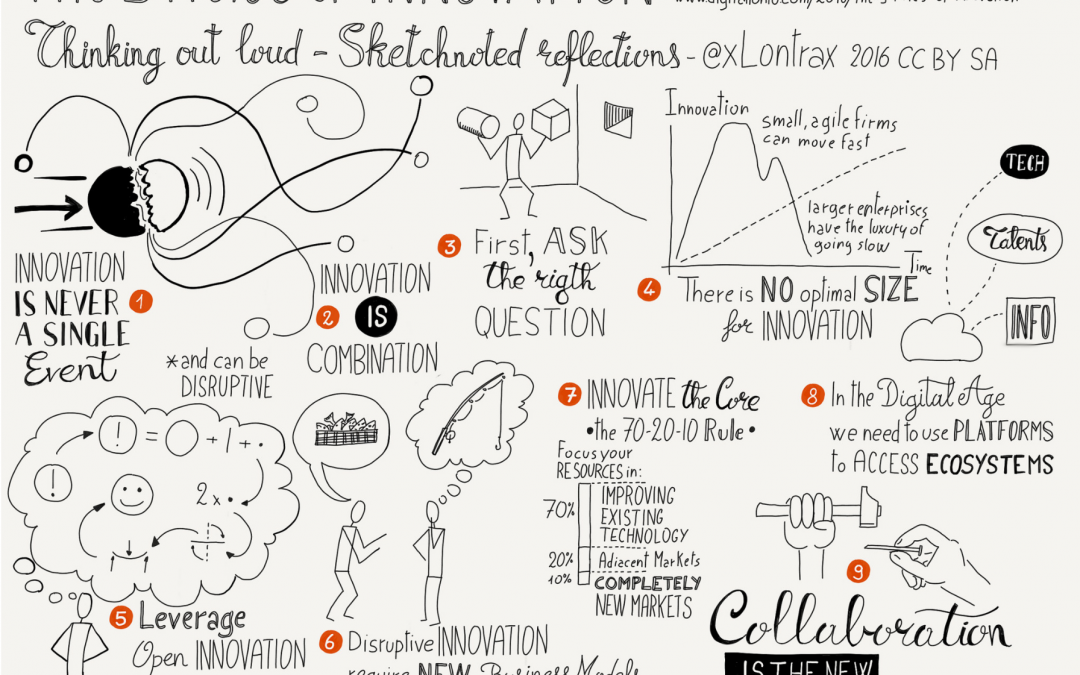 The 9 Rules of Innovation

On December 9th, 1968, a research project funded by the US Department of Defense launched a revolution. The focus was not a Cold War adversary or even a resource rich banana republic, but rather to “augment human intellect” and the man driving it was not a general, but a mild mannered engineer named Douglas Engelbart.

His presentation that day would be so consequential that it is now called The Mother of All Demos. Two of those in attendance, Bob Taylor and Alan Kay would go on to develop Engelbart’s ideas into the Alto, the first truly personal computer. Later, Steve Jobs would take many elements of the Alto to create the Macintosh.

So who deserves credit? Engelbart for coming up with the idea? Taylor and Kay for engineering solutions around it? Jobs for creating a marketable product that made an impact on the world? Strong arguments can be made for each, as well as for many others not mentioned here. The truth is that there are many paths to innovation. Here are nine of them.

Alexander Fleming discovered penicillin in 1928, but it wasn’t until 15 years later, in 1943, that the miracle drug came into widespread use. Alan Turing came up with the idea of a universal computer in 1936, but it wasn’t until 1946 that one was actually built and not until the 1990’s that computers began to impact productivity statistics.

We tend to think of innovation as arising from a single brilliant flash of insight, but the truth is that it is a drawn out process involving the discovery of an insight, the engineering a solution and then the transformation of an industry or field. That’s almost never achieved by one person or even within one organization.

The reason that Fleming was unable to bring Penicillin to market was that, as a biologist, he lacked many of the requisite skills.  It wasn’t until a decade later that two chemists, Howard Florey and Ernst Boris Chain, picked up the problem and were able to synthesize penicillin. Even then, it took people with additional expertise in fermentation and manufacturing to turn it into the miracle cure we know today.

This isn’t the exception, but the norm. Darwin’s theory of natural selection borrowed ideas from Thomas Malthus, an economist and Charles Lyell, a geologist. Watson and Crick’s discovery of DNA was not achieved by simply plowing away at the lab, but by incorporating discoveries in biology, chemistry and x-ray diffraction to inform their model building.

Great innovation almost never occurs within one field of expertise, but is almost invariably the product of synthesis across domains.

Too often, we treat innovation as a monolith, as if every problem was the same, but that’s clearly not the case. In laboratories and factory floors, universities and coffee shops, or even over a beer after work, people are sussing out better ways to do things. There is no monopoly on creative thought.

But that leads us to a problem: How should we go about innovation? Should we hand it over to the guys with white lab coats? An external partner? A specialist in the field? Crowdsource it? What we need is a clear framework for making decisions. 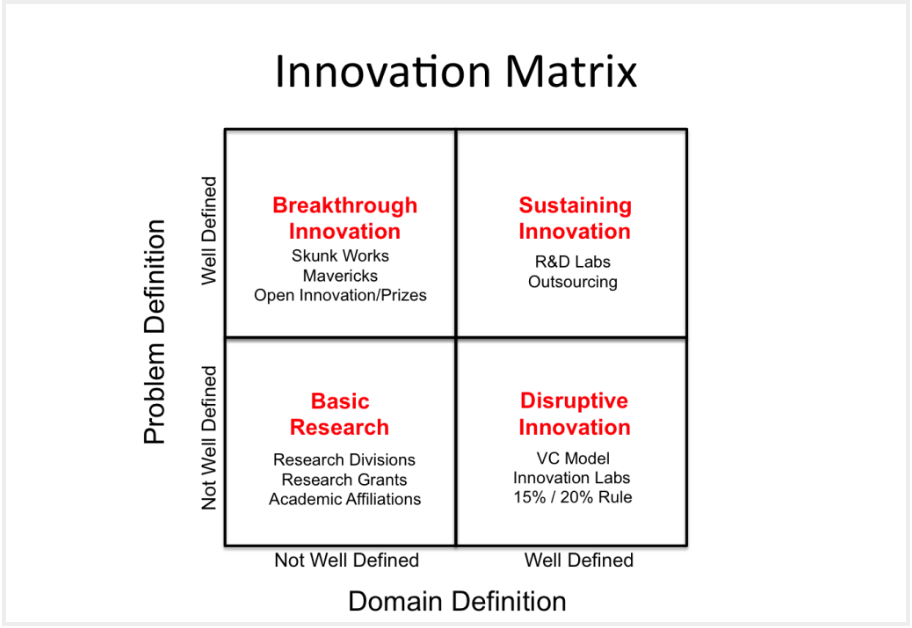 Clearly, no one method can suffice. Look at any great innovator, whether it is Apple, Tesla or Google, and you’ll find a portfolio of strategies. So the first step toward solving a difficult problem is asking the questions you need to define your approach. To paraphrase Voltaire, if you need to solve a problem, first define your terms.

Rule 4: There Is No Optimal Size For Innovation

When most people think about innovation, they think about startups. And certainly, new firms like Uber, Airbnb and Space X can transform markets. But others such as IBM, Procter and Gamble and 3M have managed to stay on top for decades, even as competitors rise up to challenge them and then, when markets shift, disappear just as quickly into oblivion.

While it’s true that small, agile firms can move fast, larger enterprises have the luxury of going slow. They have loyal customers and an abundance of resources. They can see past the next hot trend and invest for the long term. There’s a big difference between hitting on the next big thing and developing it consistently, generation after generation.

When Microsoft launched Kinect for the Xbox in 2010, it quickly became the hottest consumer device ever, selling 8 million units in just the first two months.  Almost immediately, hackers began altering its capabilities to do things that Microsoft never intended.  Yet instead of asking them to stop, it embraced the hackers, quickly releasing a software development kit to help them along.

Like Microsoft, many firms today are embracing open innovation to expand capabilities. Cisco outfoxed Lucent not by developing technology itself, but by smartly acquiring startups. Procter & Gamble has found great success with its Connect and Develop program and platforms like Innocentive allow firms to expose thorny problems to a more diverse skill set.

As was the case with Alexander Fleming and penicillin, most firms will find that solving their most important problems will require skills and expertise they don’t have. That means that, at some point, they will need to utilize partners and platforms to go beyond their own internal capabilities of technology and talent.

When Chester Carlson perfected his invention in 1938, he tried to market it to more than 20 companies, but had no takers. It was simply far too expensive for the market. Finally, in 1946, Joe Wilson, President of the Haloid Company, came up with the idea of leasing the machines instead of selling them outright. The idea was a rousing success and in 1948 the firm changed its name to Xerox.

The tricky thing about disruptive innovations is that they rarely fit into existing business models and so the value they create isn’t immediately clear. Kodak made money by selling film, so was slow to adopt the digital cameras that the company had itself invented. Yahoo’s business was focused on keeping users on its site, so passed on the chance to acquire Google.

It’s not just products that we have to innovate, but business models as well

Many people think of innovation as discarding the old to make room for the new, but as Bain & Co.’s Chris Zook points out in Profit From The Core, smart companies realize that the bulk of their profits will come from current lines of business.

Take Google for example. Yes, it pursues radical innovation, like self-driving cars, at its Google X unit, but its continual improvement of its core search business is what made it the world’s most valuable company. That’s why Google, as well as many other innovative companies, follow the 70/20/10 rule.

The premise of the rule is simple. Focus 70% of your resources in improving existing technology (i.e. search), 20% toward adjacent markets (i.e. Gmail, Google Drive, etc.) and 10% on completely new markets (i.e. self-driving cars).

Rule 8: In The Digital Age, We Need To Use Platforms To Access Ecosystems

It’s no accident that the people who would make the vision Engelbart presented at “The Mother of All Demos” a reality actually attended the event and knew Engelbart personally. In those days, it was difficult, if not impossible, to actively collaborate across time and space. Today, however, we can use platforms to access ecosystems of technology, talent and information.

Take Apple’s App Store. It is, of course, a highly effective way for Apple’s network of customers to access functionality on their phones, but it also allows the firm to access the talents of literally millions of developers. It’s hard to imagine any single enterprise, no matter how efficient or well organized, pulling off that kind of scale.

In a networked world, the surest path to success is not acquiring and controlling assets, but widening and deepening connections.

When we look back to the great innovations of the past, it hard not to wonder how it could’ve gone differently. What if chemists had picked up on Fleming’s discovery of penicillin in weeks rather than years? How many lives could have been saved? Was there really no one who could have helped develop Engelbart’s vision of the personal computer outside of Northern California?

And now, the problems we seek to solve are significantly more complex than in earlier generations. That’s one reason why the journal Nature recently noted that the average scientific paper today has four times as many authors as one did in 1950. At the same time, knowledge has been democratized. A teenager with a smartphone today has more access to information than a highly trained specialist a generation ago.

That’s why now collaboration itself is becoming a competitive advantage.

Today, there are a variety of major efforts, such as the JCESR at Argonne National labs to develop next generation batteries, the National Network for Manufacturing Innovation and the Center for Applied Cancer Science at MD Anderson that are forging a more collaborative approach. Increasingly, we’re finding that to solve really tough problems, we need to work harder to integrate people with diverse talents.

Take a slightly broader view and it becomes clear that innovation today goes far beyond research labs, Silicon Valley pitch meetings and large corporate initiatives. We all have something to offer and can add to the world’s knowledge in a way that may differ in degree, but not in kind, to the giants of the past.